We use cookies to ensure that we give you the best experience on our website Close
Skip to content
Home/Alaska Expedition, Alaska Kayaking, Bore Tide, Exposure Alaska, Gear Information, Kayaking Expedition, Prince William Sound, Talkeetnah Range/Paddle On Alaska
Previous Next

The road to a sea kayakers dream is lined by the Turnagain Arm. This is where the famous Bore Tide occurs and people have been known to surf the “endless wave”. We are on our way to the port city of Whittier for a coastal adventure, just a couple hours drive from Anchorage. The scenery is epic along this highway. Mountains to one side and the expansive Alaskan coast on the other.

Historic Roadways to the Coast 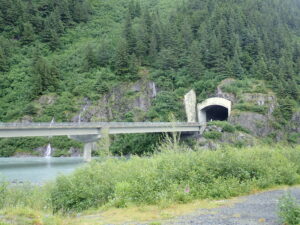 The Anton Anderson Memorial Tunnel is a roadway that only allows one way traffic. The flow of traffic alternates by scheduled times throughout the day.

In the van, we pass iridescent rivers of crystal clear blue water. These rivers are home to a variety of salmon species. Giant glaciers sit high in the nearby hanging valleys that surround us. They become greeters to the entrance of the historic Anton Anderson Tunnel. Once excavated for WWII use, this road now serves as now a gateway to the Alaskan coast.

Once in Whittier, we steered towards our favorite boating professionals, Sound Paddlers. The local sea kayak outfitters set us up with the gear we needed. With the safety briefing behind us, we strapped our boats onto the trailer and hopped into a van to head to the most optimal put-in spot nearby.

On a nearby rocky beach, we quickly unloaded the boats and split the gear up amongst the group. We all took the time to help each other latch down the hatches and double check our items. Making sure to have snacks in our cockpits for the journey ahead. Next, we lifted our boats in teams and gingerly cross the slippery rocks, dressed to the nines in our water proof gear. With the tide low it was time to go.

We placed the boats in the water one by one. One person would hold the vessel as the other carefully got in, until we were all slowly shoving off from shore. We paddled out and pried on our spray skirts so as to deflect any splashes from the oncoming waves.

First, we went over how to sustain our muscles for the long days of paddling. And most importantly, we learned how not to strain our hands and shoulders on the first day. Soon we were all finding the flow and 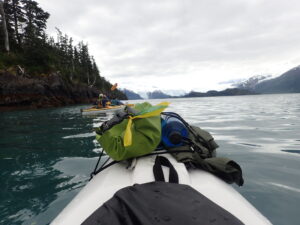 Waterproof bags make it easy to keep the things you need during the day nearby.

paddle rhythm with the partners in our boats. And the couple of people who were in a solo kayak seemed to be moving right along as well.

There was a light mist that had been dancing around. However, it did little to disguise the stunning sea scape. As the grey parted, we spotted shores decorated in bright mosses and lined with dark, sharp rock faces. Trees leaned over cliff sides, roots climbing deep into the sprawling forests behind them. As we passed the endless amounts of waterfalls we couldn’t help but get lost in the trance of the paddling on the Alaskan coast.

Looking up into the swirling greys and different layers of clouds, we started to round a peninsula. There was a harsh wailing sound that built in amplification and echoed off the rocks with each paddle stroke. Soon we came upon the cause of this uproar, a high hung cliff adorned with thousands of black footed gulls. These birds are known as the Kittiwake.

These migratory gulls are nesting birds that migrate to Alaska for the warmer seasons. They would call to their neighbors with shrill cries, giving warnings, and listening for their chick’s distinctive return calls. They can pick out their young’s cries from the thousands occurring at once.

These coastal gulls nest on towering cliffs next to the ocean to keep away from predators. We sat at the base of the rookery watching the chaotic synchronicity of parents leaving and returning to nest and let ourselves take in the sound of their calls. They were singing their namesake: “Kitee-waa-aaake!”

Soon, we paddled off and found a beach to enjoy lunch. Some folks skipped stones as others lounged in the brief moments of warm sunshine. With the tide coming in, we decide it was better to paddle on than to move the boats again. Once in the water again, we passed islands that seemed to be disappearing as the tide steadily rose. It was important to give these islands a generous clearance. The shallow waters disguised the sharp rocks below. They are easy to damage the bottom of a fiberglass boat, and can quickly end a trip.

In the distance we saw a dark figure poke its head from the water, like a scuba diver surfacing. It seemed to be observing us and started to rise a bit further out of the water. Straining my eyes, it seemed to be a young harbor seal, testing his boundaries and exploring his curiosity. Upon trying to figure out just exactly who and what I was seeing, the seal plunged back under, almost as quickly as they had appeared.

The End of the Beginning 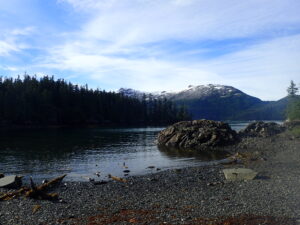 On the shore of a designated camping area in the Prince William Sound.

Not long after, the golden hour started to paint the waters surface and silhouette the shores. We were exhausted and ready for some rich, warm food. Finally, we pulled into the cove that gives the best wind coverage and view of both sides of the shore.

A deep green moss blanketed the nearby forest and covered the wood boards leading to designated camp platforms. Thick bushes and old fallen giants lined the way to spring fed streams. It is easy to get lost in the boundless wonders out here. Just as my mind was starting to reel over things large and small, I was reminded of dinner, as the smell of a cooked meal found me. As I filled my water, exhausted, I headed towards the laughter of camp to reminisce on the day with the others.