We use cookies to ensure that we give you the best experience on our website Close
Skip to content
Home/Alpenglow, Exposure Alaska, Matanuska Glacier, Natural Wonders of Alaska, Talkeetnah Range/Alpenglow: An Optical Phenomenon
Previous Next

The way a sun sets seems to be different everywhere you go. The colors more saturated, the golden hour just a bit longer, the translucent hues playing across cloud covers. Each sunset feels like a finger print of the Earth, unique and different in nuanced ways. The same goes for alpine sunsets. These sunsets seem to have a burning glow that blanket the mountains and valleys unlike any other terrain. But why?

Alpenglow is an atmospheric optical phenomenon which makes mountains appear to glow in vibrant, warm tones of pinks and reds. This occurs as the sun sets and just before it rises, but only if in the right conditions (Phenomena). There is still speculation as to what exactly alpenglow is, and whether it is caused by direct light from the sun hitting residual moisture suspended in the atmosphere or indirect sunlight as the sun passes below the horizon. Since there are varying theories, the term Alpenglow is not well-defined. With that being said, let’s explore the theories and origins of these extraordinary sunsets.

Alpenglow is typically seen illuminating mountain sides and sometimes reflecting off of low-lying clouds. The term alpenglow is from the German word Alpenglühen, meaning “to glow.” Tyrolean legend has it that the color derives from when the king of dwarves was excluded from a royal wedding and sought his vengeance by casting away anyone who would enjoy the sights of his beautiful rose gardens. He kept them hidden on the mountains sides. The scorned dwarven king proclaimed that no one should see them by day or night. Thus his beautiful gardens can only be seen in the sunsets. 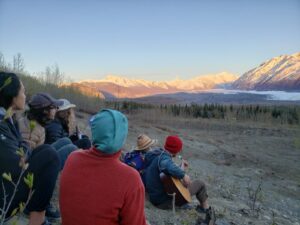 This term helps to define the beautiful light that strikes many alpine regions. How this happens exactly is disputed by two different theories of direct and indirect light. The first theory is of direct light; sunsets occur behind the observer and thus bends the light making the mountains appear as if they have taken on a new color scheme temporarily. Additionally, if the observer were to go to the top of the mountain they would only see direct sunlight and no hues.

When the observer sees pinks, oranges and reds they are in fact observing differing reflections of red light. This frequency of light can still travel through the atmosphere with the curvature of the Earth. Many believe that the more curvature the Earth gives to the sunlight during the equinoxes, the more chances to spot this phenomenon in the sunsets there will be.

The second theory is that of indirect sunlight. This theory states that the observer would see the same hues on the top of the mountain as they would on the ground. The term indirect light is used to indicate that the light is, in fact, bouncing off of moisture-laden water molecules still trapped in the cooler mountain air, creating vibrant color displays.

Regardless of their cause, the views of Alpenglow can be absolutely breathtaking. It is a view outdoor recreationists adore and photographers chase. So when you are in the alpine don’t forget to stop and bask in the glow of the mountains, the alpenglow that is.